Tyrannosaurus Rex is a genus of theropod dinosaur. The type name - Tyrannosaurus Rex - means "tyrant lizard king". It lived in the Late Cretaceous Period, about 68-66 million years ago. It reached about 35-42 feet in length, 11-13 feet in height and weighed up to 5-9 tons. For 100 years it was believed to be the largest carnivorous dinosaur ever to walk the earth. But then, even bigger predators and piscivores, Giganotosaurus, Carcharodontosaurus, Tyrannotitan, Mapusaurus, Oxalaia and Spinosaurus were discovered,

However, T. Rex is still the most powerful theropod dinosaur of all time. Tyrannosaurus (Phineas and Ferb) The teeth of Tyrannosaurus Rex

are up to 30cm long. They aren't Tyrannosaurus (Albert Asks)

as sharp or thin as most other predators, because they weren't designed for slicing through meat - they were designed for crushing bone. It had sixty teeth in its mouth, which was 1.5 meters long, large enough to swallow a child. It had a bite force of 4-6 tonnes - Tyrannosaurus (Timon And Pumbaa) 2-3x as much as a Great White Shark. Horrid Tyrannosaurus

Its sense of smell was extraordinarily good, and it could smell prey from miles away. It had equally good eyesight and hearing, allowing it to detect prey from several miles away. These keen senses, bone-crushing teeth, and powerful jaws made it the greatest land predator ever. Tyrannosaurus (Horrible Science)

lived in North America with plant-eaters such as Triceratops, Ankylosaurus, Edmontosaurus, and the sauropod Alamosaurus. They all had excellent ways of defending themselves, which was why T. Rex had to be so advanced. T. Rex bite marks have been found on the bones of Triceratops, showing that they did indeed fight each other. T. Rex had only one drawback - its puny arms. Tiggersaurus Rex

They were barely longer than a man's and looked tiny against such a massive beast. Two families of carnivorous dinosaurs had particularly short arms - they were the tyrannosaurs and the abelisaurs. T. Rex's arms were actually still well-muscled, and may

have been used for holding down prey. Each hand had two fingers - a trademark of the tyrannosaur group. Tyrannosaurus (Horrible Histoires)

Recent evidence has also suggested T. Rex lived and hunted as a family group. This would increase the chances of survival for the newborns and the young, and would also increase the chance of a successful hunt. For example, if one T. Rex confronts a Triceratops, and the other goes in from the side, it is a lot easier to kill.

Jurassic Fight Club - 'T. Rex Hunter', in which it fought a Nanotyrannus, 'Biggest Killers', which was examining the largest predators, and 'Raptor vs T. Rex', where it stole an Edmontosaurus off the raptors that killed it. In the Toy Story Series, Rex is a toy T. Rex.

Recent ideas and studies on T. Rex suggest it may have had feathers, though not many; maybe just a ring around the back of the skull. This theory, and a picture of it like this, was shown in

Tyrannosaurus (Once Upon A Time)

'Dinosaurs' by Steve Brusatte, a book Tyrannosaurus (The Legend of Tarzan) 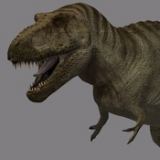 Tyrannosaurus Rex and Nanotyrannus as they appear in Jurassic Fight Club

Rex from the Toy Story franchise 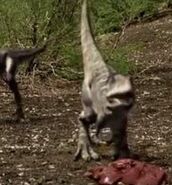 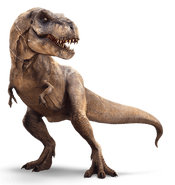 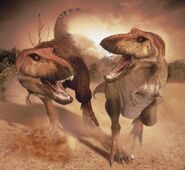 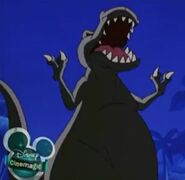 Barney the Purple T. Rex from Barney and Friends

Community content is available under CC-BY-SA unless otherwise noted.
Advertisement